Over the weekend I undertook a project that I’d originally intended to do when I moved into my apartment, but I was on a deadline with a big project for a museum, and there was no time. Since then, well, I just haven’t thought about it except once in awhile.

Then last weekend I got a bee in my bonnet about it. I thought about waiting until Memorial Day weekend, when I would have three days before it would need to be finished, now that I work from home again. But nope! I decided to rush into it, if only for the feeling of accomplishment that such a project can bring.

It also doubled as a way to keep me from spending too much time on the computer over the weekend— successfully! Below are a series of process pics showing the stripping and re-painting.

As always, these projects take about four hours longer than I ever expect, so the total clocked in at around twelve hours. Below is the full photo of the finished desk, with all the tech back in place.

For this project, I used some of the less dangerous, more eco-friendly (so they say on the label) varnish stripper, which is part of what took quite a bit longer than expected, and more elbow grease. My body ached for a couple of days after this, particularly because I was working on the floor, as you can see in the photos.

It was totally worth it though! Has anyone else done any big DIY or other projects while sheltering in place?

The past few days I’ve finally begun sinking hours of time into acts of creation (outside of my design work—I’m still working full time hours via telecommuting, for which I’m incredibly grateful).

Despite my plentiful physical art supplies that have accrued over years —like my watercolors which have been sitting out at the ready, for weeks but only used once so far— it’s the iPad that has drawn me in. Maybe it’s the immediacy of it, the ease of being able to duck in and out of a piece spontaneously, that’s made it my medium of choice this past week.

Whatever it is, I’ve found myself spending hour upon hour, zoomed in and getting lost in details. As I wrote when posting one of these on instagram, I believe it’s the sense of control that has drawn me to this obsessive practice.

So I was up until 2am working on this lonely tower. I just get all zoomed in and I can’t seem to stop w the textures and lines and teasing out details. I think it has to do with the utter lack of control we have in this battle against the deadly invisible. The void that is yawning around every grocery aisle or on every doorknob.

So, finding a sense of control where we may is a kind of balm. Like how washing ones hands for so long and so bloody frequently began as an annoyance and has become our (perhaps) life-saving, lung-sparing mantra.

These two chess horses with sorry looks on their gentle faces is the exception to the fiddly inked lines this week.

What have you found yourself doing differently since all this began? Since lockdown and stay-at-home started? Is there anything in particular that’s helping you cope?

I had imagined so much extra time to do things like write and draw, now I’m working from home and staying in my house 97% of the time. It hasn’t really been the case. I’m still working, and more hours than before. The 8-10 hours in front of the computer leave me tired— it’s a combination of the work and the general stress level.

I miss reading on the subway. I’ve not read much at all since work-from-home began. But I’m going to start a new book today: Crossing to Safety, by Wallace Stegner. It was a recommendation from a friend.

I did start a new piece of art last Sunday evening, based on a prompt from a friend. She had designed a sort of Medieval talisman as a kind of art protection against the virus. Hers featured a black plague doctor, complete with the beak-like masks of those times and large gloves. She urged me to design one as well.

So I started this on Sunday last, and completed it Tuesday night. The ‘Hand of Fatima’ in this case is comprised of two latex gloves with a protective eye. The corona virus is being pierced with a daggar.

END_OF_DOCUMENT_TOKEN_TO_BE_REPLACED

Above is one of the canvas tote bags I screen printed back in December. It’s a posed picture; clearly I had to print them upside-down to keep the handles out of the way. I just wanted to put it in the context of the studio where I printed them. They came out well, though! Only two had to be discarded (test prints, the ones I learned from).

I printed the red first, and registration / alignment of the black ink was fairly easy to achieve, mainly on account of how thick the lines of the image are. Once I’ve heat-set the ink, I’ll put some of these in my Etsy shop for sale.

And here are some small pencil case or cosmetics pouches that I used the same colors of inks on. I gave a few of these away as Christmas presents, but there may be a couple left that are decent enough to sell. I’ll post the link here when I’ve loaded up the shop. 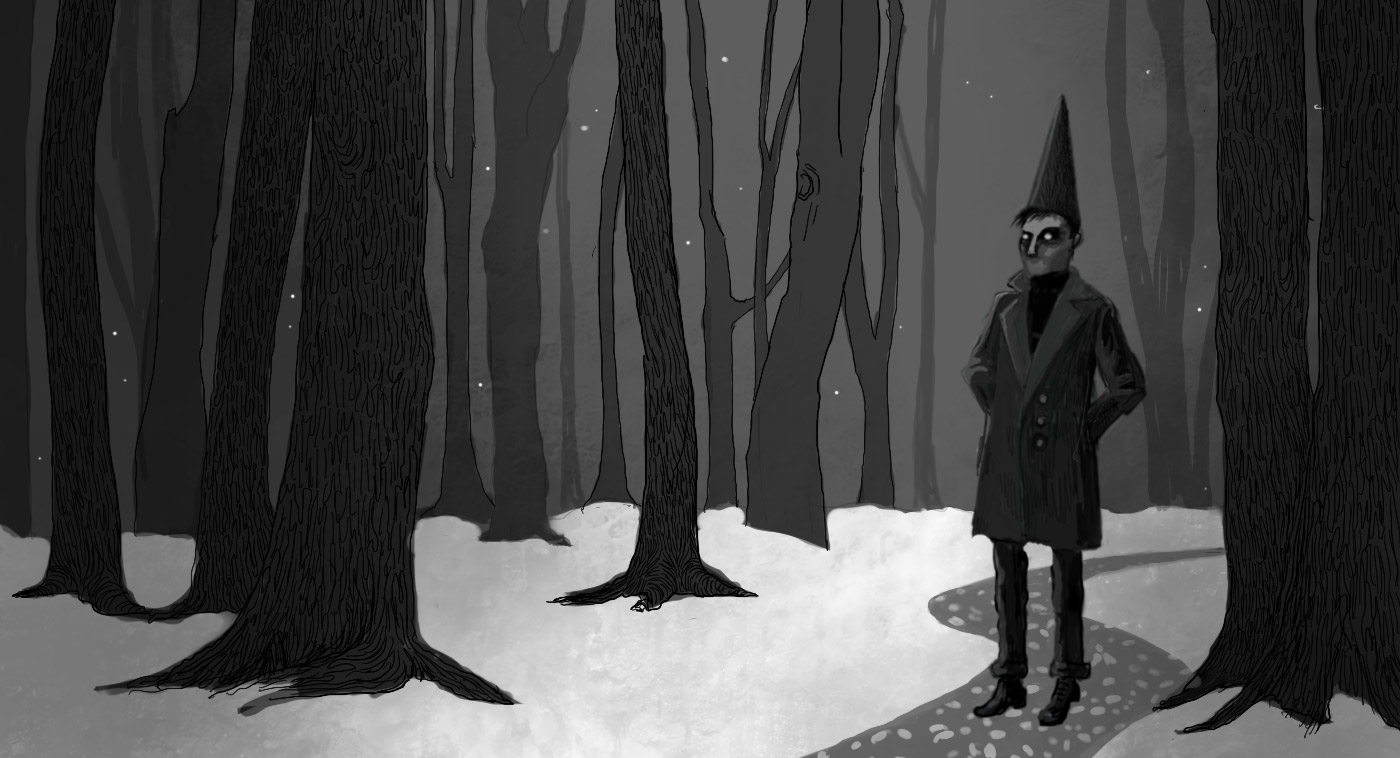 Meet the witch-boy. He surfaced toward the end of my Inktober series for this year. I did a couple more sketches of him after the first, intrigued.

A few weeks ago I began studying intaglio again, and decided I’d like to do an etching of this guy, but that initial sketch needed some work, it was very rough. Below are four different studies I worked on my iPad of the witch-boy in various different wooded settings.

Above is the first study. I like the composition of the snow and path, but after some thought I decided that these slender trees are not quite what I had in mind; they lack mystery. So I moved one to another.

Here are some beefier trees which I can easily imagine being toned with a combination of line etch and aquatint (a way of introducing continuous tone shades to a print) I like this one! But I kept going.

END_OF_DOCUMENT_TOKEN_TO_BE_REPLACED

Tuesday I went to my first class in over 7 years— returning to the art of copperplate etching (intaglio). I’ve a small plate ready to work on before my next class on Tuesday. This is the wee sketch I did for it today.

It needs finessing, and then I’ll transfer it in reverse to my plate. I may change those trees to pines, and add some snow. We’ll see. I want to keep it fairly simple, but use this to re-familiarize with the studio and processes after such a long hiatus. Gotta wake up the muscle memory.

After I’ve got into a bit of a groove, I’ll embark on something more complex. I really want to design images with the various techniques in my mind from the start. Work to the medium’s strengths, not just mimic ink drawings or some such. More to come here as I progress! 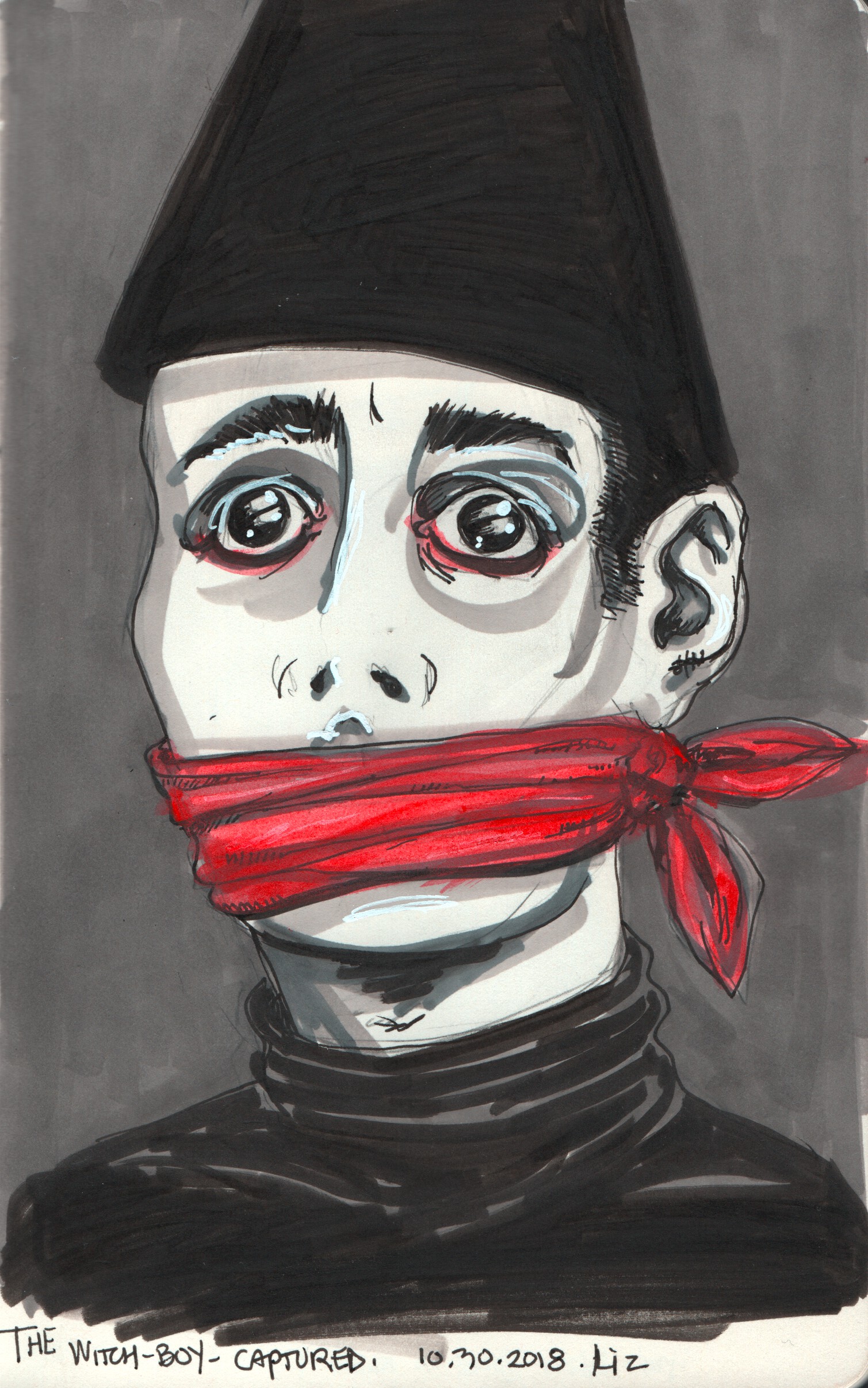 I lost my momentum toward the end of the month. I remained a day or two behind schedule, and when catching up was posting to social media, but not here each day, So this post is a bit of catch up.

So there totaled three drawings of the witch-boy, leading up to Halloween. The final drawing was just a plain old hair study. Terrifically anticlimactic, honestly. I haven’t even posted that one elsewhere, as I was sort of thinking I might do something else for the 31st ‘official’. But now it’s November third, time to let it go.

Here’s what I haven’t posted the past few days— and I’m still three days behind! But the missing drawings will be forthcoming. I’m a man of my word, dammit.

Above, Day twenty-seven: : The witch boy on a night walking beneath the pointy crescent moon.

Day twenty-six: My FACE! Here’s a variation, as I already included one in the last post. This makeup was my 26 day drawing, haha. 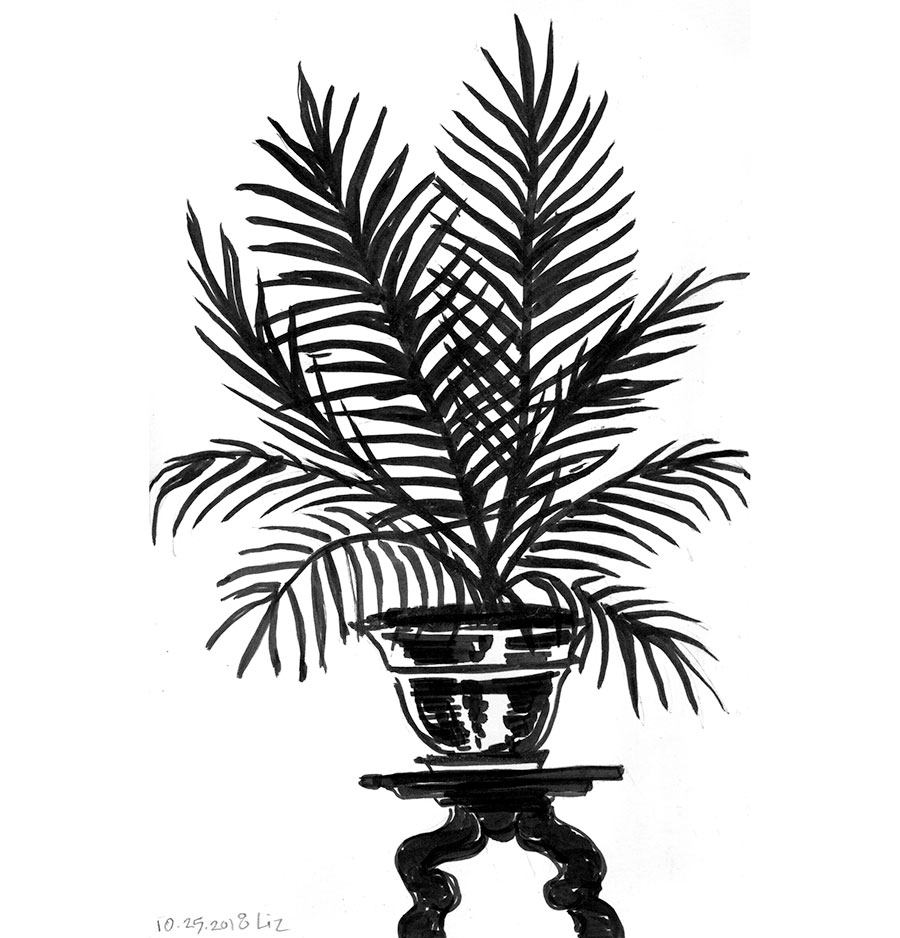 Day twenty-five: a palm plant, enjoying the sunshine of the east-facing window in her new-old house. 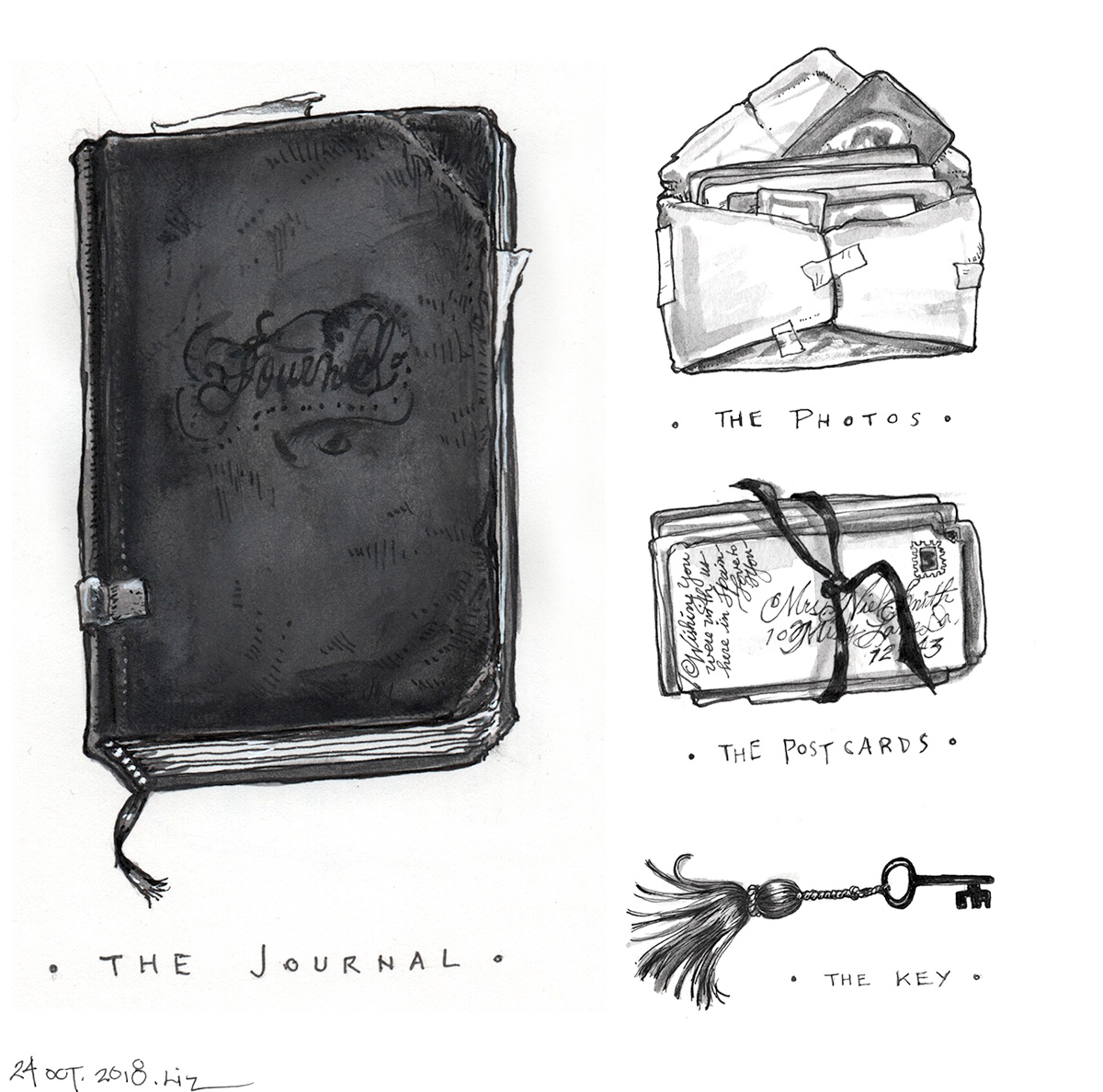 Day twenty-four: When at last she’d completed ministrations to her old-new house in such ways that compelled her, she returned to the leathery old box— a delicious reward. Retrieved from its out-of-the-way place of safe-keeping (much to Cat’s chagrin), she opened it. It contained the following:

+ One journal; worn but not ruined
+ One sheaf of very old photographs (same)
+ One packet of post-cards, written long ago (in surprisingly decent nick)
and
+ One iron key, threaded on a threadbare plaited tassel

The mystery had only just begun. 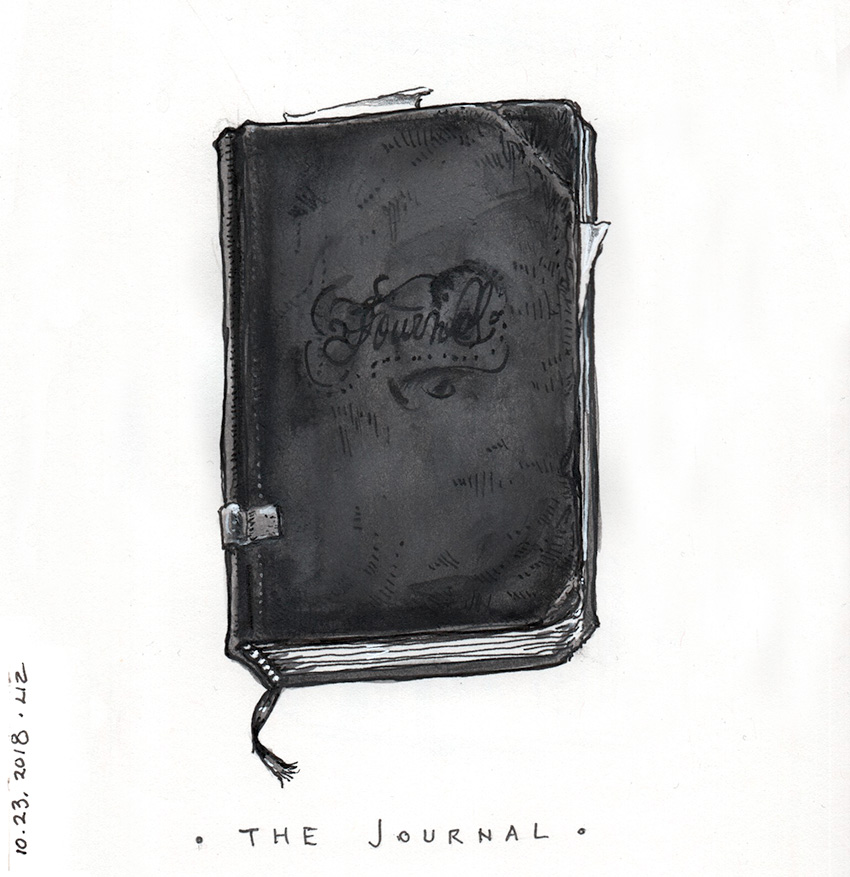